The male of Saxaul Sparrow have grey yellowish tinged upperparts. The middle of the crown and the neck are black with little light edges on the feathers. The feathers of the mantle with narrow black core strips. Two broad rusty-buff strips starting from the bill cross the flanks of head. The lore, behind eye strip, chin and throat are black. The cheeks and underparts are dirty-whitish, the feathers of undertail have light-brownish spots. The flight feathers are brownish with yellowish-grey edges. The upperwing coverts are black with light edges hidden the black parts of neighbor feathers, and with white tips of greater and median coverts. The white tips of the greater and median coverts form the two bars on each wing. The tail feathers are brownish with narrow light edges. The bill and claws are black, the legs are light-brownish. The eyes are dark-brown. The female is similar on male but has dimmer color. The crown is dark-grey almost black with different dispersing of the light edges on feathers. The flanks of the head are rusty. The lore, behind eye strip, chin and throat are dark-grey. In autumn plumage both males and females have larger grey and rusty-grey edges of the feathers. Juveniles are similar on female but have more buffy background color and more expressive dark strips on the mantle. The bill is light-brownish. Weight 23,7-38,0 grams, wing 73-80, tail 60-60 mm.

The Saxaul Sparrow inhabits the deserts of the south half of Kazakhstan. The detailed distribution in Kazakhstan please see in the chapter "Races".

The Saxaul Sparrow is similar on other sparrows on behavior but very shy. In Kazakhstan Saxaul Sparrow is common resident or short distant migrant, not gravitating to the anthropogenic countries. It inhabits the riparian forest; Asiatic Poplar groves; saxaul forests especially with the individual Asiatic Poplar trees; old clay precipices; and rare the human constructions; always not far from water. At non-breeding time it visits the bush thickets, dry low mountains with scarce vegetation and stubble fields. In spring singles and small flocks of 10-20 birds observed on end February – end March, the significant migration isn't observed. The pairs form in April – early May. Breeds by separate pairs on 50-130 m one from another. Sometimes it breeds in small colonies. It builds nest in saxauls or other riparian trees holes (natural or Woodpecker made), in other cavities and in raptor nests. The form of the nest (even built in holes, burrows and other cavities) is typical heavy ball-shape built from the thin twigs, dry grass, reed leaves with the round entrance from one side. Nest is lined by the hairs, downs, feathers, pieces of green wormwood, sometimes artificial materials. On gross colonies birds pilfer nest materials one from another. Mainly female constructs nest but sometimes male helps in building very actively. Clutches of 3-7 (usually 5-7) eggs are laid on end April – early June. Eggs are light with rufous spots. Both parents feed juveniles, which fledge in end May – early July. Per season two broods are reared. Birds build second nest nearby of first one and it is ready on time of fledge of first brood. The Saxaul Sparrow eats the seed of wild trees and the insects. In winter the number of Sparrows decreases as some birds migrate in October – November. 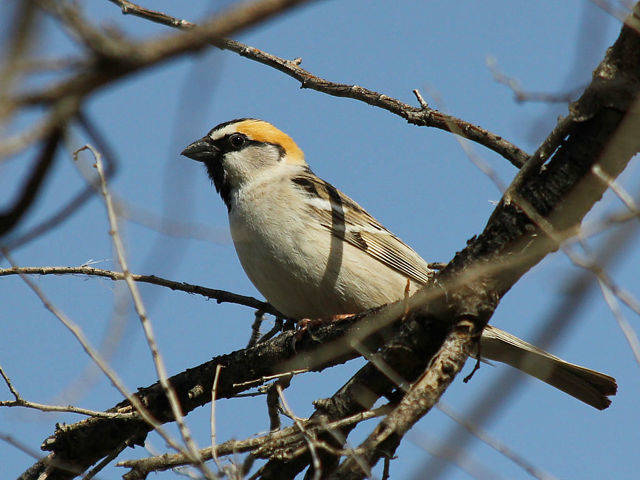 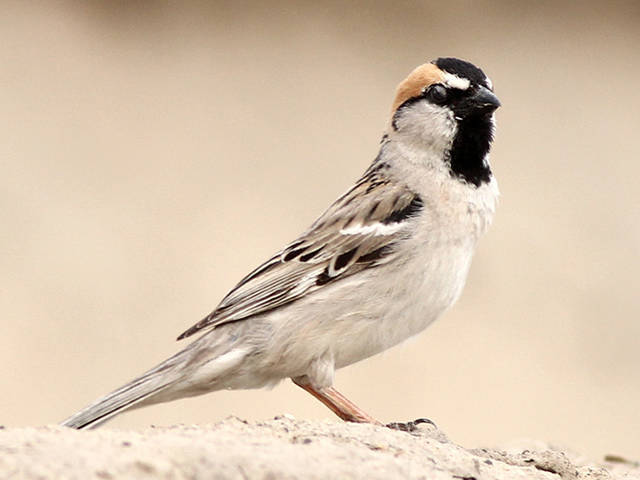